During the Great Depression, when the economic structure of the U.S. was in total chaos, President Franklin Roosevelt introduced a series of experimental projects collectively known as the New Deal. One such project was the Banking Act of 1933, WealthHow provides a summary of the impact and accomplishments garnered by this act. 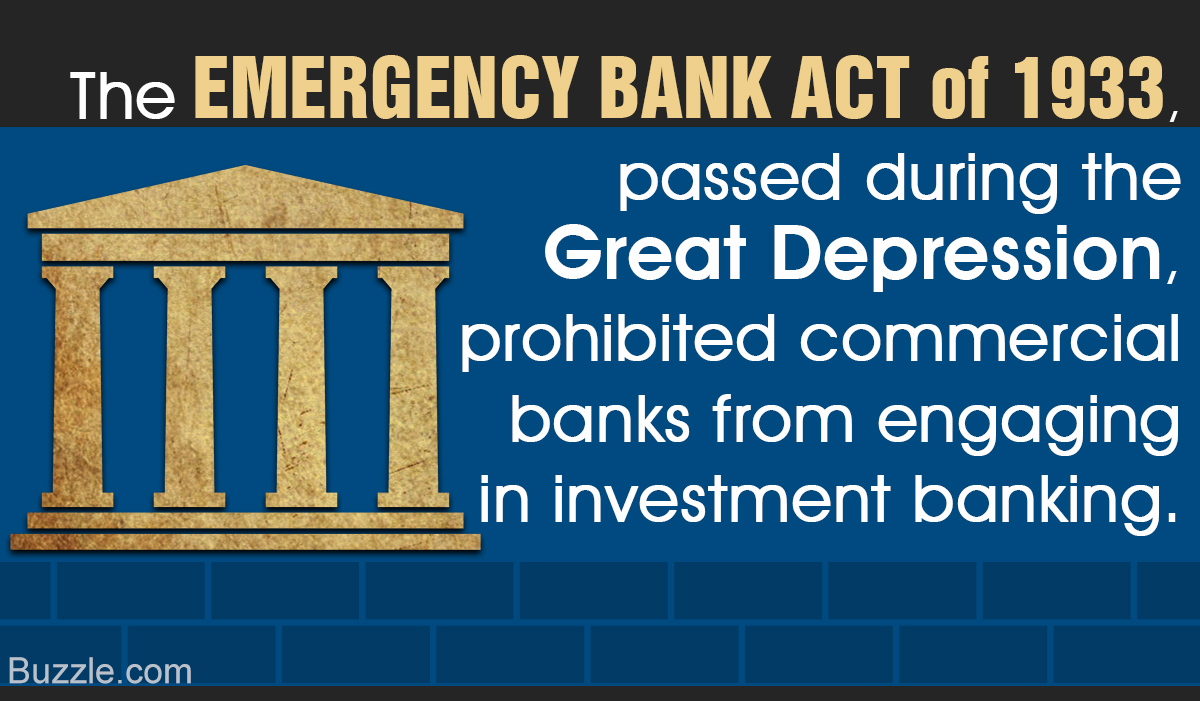 During the Great Depression, when the economic structure of the U.S. was in total chaos, President Franklin Roosevelt introduced a series of experimental projects collectively known as the New Deal. One such project was the Banking Act of 1933, WealthHow provides a summary of the impact and accomplishments garnered by this act.

Prior to the Banking Reform Act of 1933, the depositors money was not safe in the bank. If the bank made faulty investments, then it could not repay the depositors and all the savings were lost.

Having a savings account prior to the Banking Reform Act of 1933 was risky as the depositors had to often deal with collapsed banking systems that went bankrupt due to bad investments. When the depositors got an inkling that their bank was going to shut down, they would rush to collect their hard-earned savings and result in panic and chaos. These were widely witnessed scenarios during the days of the Great Depression. During the period of 1929-1932, a total 5,761 banks went out of business.

To ensure that the economy does not tumble further and the faith of people be restored on banks once again, President Franklin Roosevelt swiftly introduced the Banking Reform Act of 1933, discussed below are the salient features of this act.

➔ ‘Black Tuesday’ rose like a black bolt on the American economy. Stock markets crashed, companies went bankrupt, common people lost their savings, and overall, an economical upheaval arose. The day marked the beginning of the Great Depression―it was October 29, 1929.

➔ Widespread unemployment arose due to the closure of many companies, and by the year 1932, one-quarter of the American population were unemployed. During such economic stagnation, President Franklin Roosevelt got elected to the high office, and he ensured the angry masses through his first inaugural speech on March 4, 1933 that the government would take immediate measures to curb the bank crisis and introduce a collective set of projects known as the ‘New Deal’ to stabilize the economic condition.

➔ Two days later, he declared ‘BANK HOLIDAY’ from March 6 to March 10 to suspend withdrawal transactions all over the nation. During this period, he presented before the new Congress the proposal of the ‘EMERGENCY BANKING ACT’. On March 9, 1933, after only forty minutes of historic debate, Congress passed Roosevelt’s Emergency Banking Act.

What Did the Emergency Banking Act Do?

➔ Most importantly, the law authorized the President through the treasury department to reopen banks that were capable of meeting financial obligations and aid those that were not. With this, the banks were divided into four categories, and over half the nation’s banks were fit to reopen and fell in the first category. The banks in the second category were permitted to allow a percentage of its deposits to be withdrawn. The banks in the third category were the ones that were waiting to collapse, and hence, these banks were only permitted to accept deposits. And finally, only five percent of banks fell in the fourth category for complete closure.

➔ The new law authorized the twelve Federal Reserve Banks to issue additional currency on good assets, thus aiding the banks to fulfill every legitimate call. This new currency reached out to every part of the country through the Bureau of Engraving and Printing.

➔ The Act was divided into five sections, Section I authorized the President to approve banking holidays and regulation of all banking functions, including “any transactions in foreign exchange, transfers of credit between or payments by banking institutions as defined by the President, and export, hoarding, melting, or earmarking of gold or silver coin.”

➔ Section II authorized the comptroller of the currency the power to restrict the operations of a bank with impaired assets and to appoint a conservator, who “shall take possession of the books, records, and assets of every description of such bank, and take such action as may be necessary to conserve the assets of such bank pending further disposition of its business.”

➔Section III authorized the secretary of the treasury to determine whether a bank needed additional funds to operate and “with the approval of the President request the Reconstruction Finance Corporation to subscribe to the preferred stock in such association, State bank or trust company, or to make loans secured by such stock as collateral.”

➔ Section IV authorized the Federal Reserve the flexibility to issue emergency currency―Federal Reserve Bank Notes―backed by any assets of a commercial bank. Finally, section V made the Act an effective law.

➔ One of the provisions of this Act, The Glass-Steagall Act prohibited commercial banks from engaging in the investment business. It tightened the regulations of the national banks to the Federal Reserve System and prohibited bank sales of securities, thus creating the Federal Deposit Insurance Corporation (FDIC), which insured bank deposits with a sum of money reserved from banks.

Was the Emergency Banking Act a Success?

➔ On March 13, banks reopened to long lines of customers returning their stashed cash back to their bank accounts, the public had stashed about USD 1.78 billion out of which about two-thirds were redeposited by the end of March.

➔ A historic record was set on the New York Stock Exchange, it showed the largest one-day percentage price increase ever with Dow Jones Industrial Average gaining 8.26 points to close at 62.10; a gain of 15.34 percent, on March 15, 1933.

➔ The Act created the Federal Deposit Insurance Corporation or FDIC, people’s faith was restored in the banking system as more than sixty five percent of all U.S. banks reopened. The economy was pulled out of the monetary stagnation temporarily.

➔ However, the Act authorized the Secretary of the Treasury with the power to withhold gold owned by individuals in exchange for a meager amount in the form of paper currencies, this currency diminished according to the market gold standards.

Is This Act Still in Effect Today?

This Act effectively demarcated the commercial and investment banking boundaries, it was revolutionary and precursor towards an establishment of safe banking system for the public.