Rise in the stock market can make an ordinary man a billionaire. Likewise, a crash can wipe out his entire wealth. We bring you a list of the worst stock market crashes in recent history. 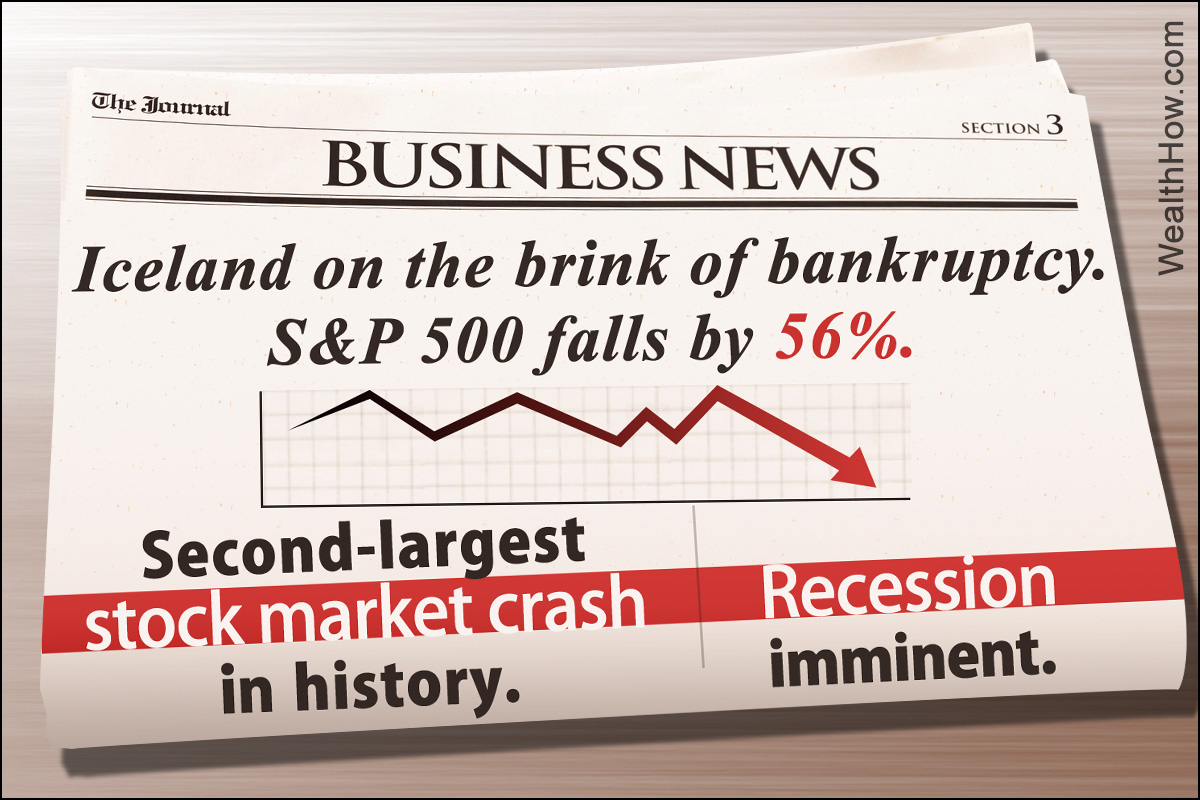 Rise in the stock market can make an ordinary man a billionaire. Likewise, a crash can wipe out his entire wealth. We bring you a list of the worst stock market crashes in recent history.

‘Tulip mania’ refers to a time in the Dutch Golden Age when the contract prices for tulip bulbs escalated to extraordinary heights, and then sharply collapsed.

How often have we heard about the risks involved with investing in stock markets? And yet, the high returns it offers is far too tempting to ignore, irrespective of one’s economic standing. Many experienced players here see the bear market as rather interesting opportunity – the best buying time. Buying at a lower rate, and selling when the bull returns can be one of the quickest means of making money. But, the trick here is timing. No one knows for sure when the market falls or rises. Worst still are the crashes.

A stock market crash is when there is sudden and rapid drop in prices of a majority of stocks. Sometimes, it is a result of a major catastrophe, but is usually driven by panic. Anticipating losses many stockholders attempt to sell their stocks, which ultimately causes the prices to go down further, resulting in a vicious cycle. A stock market crash might also be followed by inflation or recession and can last for years.

Stock market crashes have been far too many to enlist, right from the Kipper und Wipper financial crisis in the Roman Empire, to the Dow Jones that dipped last minute. So, what we’ve done in this WealthHow article, is restricted our time frame to the last 100 years, and picked the worst of the entire lot.

Major Stock Market Crashes in the Past Century

“There is no cause to worry. The high tide of prosperity will continue.”
– Andrew W. Mellon, Secretary of the Treasury in September, 1929.

Call it the crushing blow dealt by the opulence of the Roaring Twenties, the crash of 1929 will be remembered for several reasons, the foremost being that it triggered the era of the Great Depression, which lasted roughly till the commencement of WWII. To say that the corpulence and the excesses of the twenties were responsible for this devastation would be an understatement. Investors were too busy rolling in their new found wealth to pay heed to those who warned them of an imminent crash. Consumers were riding high on debt, all thanks to the easily available credit. The scale of production was slowing down as well, and yet people chose to throw caution to the wind.

The build up to this crash saw a massive increase in the Dow Jones Industrial Average (DJIA), reaching a peak rise in early September. Later that month, when the LSE crashed, the ripples were felt across the Atlantic, kick starting a period of instability. Newspapers across the US covered the heavy trading that took place in the last week of October as people scrambled to liquidate their stocks.

On October 29th, 1929, 16 million shares were traded, which led to a sharp dip of 12%. The combined losses of October 28th and 29th amounted to $30 billion, and the aftermath of this crash saw a slump in the economy which lasted until 1954, a good decade and a half after the Second World War ended.

“The bear market might already be over.”
– John Templeton, investor and mutual fund pioneer, in the week that saw the 1987 stock market crash.

October 19th, 1987 is remembered for the sharp plummet in the DJIA (508 points), the biggest ever for the Wall Street in a single day. Events leading up to the crash were eerily similar to the event of 1929, with the instability and the war with Iran that ran parallel. The pleasantly surprising aspect, however, was the swift recovery that followed, which kept recession at bay. The crash originated in Hong Kong, where stock values had declined by over 45% by the end of the month. The sudden ebb in stock values spread to Oceania, Europe, and eventually hit the United States.

The DJIA made a smooth recovery, remaining positive for the rest of the year, and met its previous high of 2,722 points almost 2 years later.

“I believe that in years to come, historians will see the beginning of the 21st century as the ‘golden age’ of real estate.”
– David Lereah, The National Association of Realtor’ chief economist, in his book Are You Missing the Real Estate Boom? (2005)

The Credit Crisis of 2007-2008 may not technically qualify as a stock market crash, but the resultant devastation it caused is considered to be as worse as the Thirties. The bursting of the housing bubble in the US economy had a domino effect on the stability of financial institutions worldwide, including Lehman Brothers, Merrill Lynch, Fannie Mae, Freddie Mac, Washington Mutual, Wachovia, Citigroup, and AIG.

It all started when financial institutions began to create policies that actively supported home ownership by making way for easily accessible mortgages, assuming that the real estate market would remain a permanent goldmine. That was not to be, of course, resulting in evictions, foreclosures, not to mention the escalating number of unemployed people.

The world economy slowed down, and its repercussions were felt in the international trade sector. The UK spearheaded the European Union’s response by announcing several austerity measures.

The Stock Market Crash Of 2011

“We do have a serious problem in terms of debt and deficit, and much of it I inherited.”
– Barack Obama, President of the United States, speaking at a fundraiser in August, 2011.

On August 6th, 2011, the credit rating agency Standard & Poor’s downgraded the U.S. Federal Government’s rating from AAA to AA+, which attracted criticism from several influential quarters, which included the U.S. Treasury as well. This month saw a swift decline in the stock values throughout the world. Europe, in particular was reeling under the shock of the speculation surrounding France’s credit rating, as well as the debt crisis in Italy and Spain.

For stock markets worldwide, the rest of the year remained volatile, with consumers preferring to invest in gold, considered to be a relatively secure option. As a result, gold prices escalated to more than $1700.

“I pledge you, I pledge myself, to a New Deal for the American People.”
– Franklin D. Roosevelt, the 32nd President of the United States, on the New Deal economic program.

Just as the U.S. was removing itself from the clutches of the Great Depression, it suffered a setback in 1937, when the Roosevelt administration tightened the fiscal and monetary policy. The GDP dropped 11% and industrial production fell 32%, making it the third-worst US recession in the 20th century.

Politically speaking, the atmosphere in Europe was getting volatile, not offering any respite to the markets in the United States as well. The Roosevelt government had to take the heat for their poor policy choices during the Depression era.

“You buy our crude oil and sell it back to us, refined as petrochemicals, at a hundred times the price you’ve paid to us…; It’s only fair that, from now on, you should pay more for oil. Let’s say ten times more.”
– Mohammad Reza Pahlavi, the Shah of Iran, commenting on the oil crisis of 1973.

Several factors contributed to this stock market crash, including the collapse of the Bretton Woods system, USD devaluation, and the 1973 oil crisis. The DJIA lost 45% of its value – the seventh worst fall. The period also saw a major fall in GDP growth, going down to around -2% from 7.2%, from just two years, back and a rise in inflation to 12.3%.

The UK took the worst hit, with the London Stock Exchange’s FT 30 falling by 73%. It was also accompanied by banking and property market crisis, pushing UK to recession. All the major stock markets were also affected, and many losing over 43% of their market value.

“During the next 12 months, scores of high flying Internet upstarts will have used up all their cash. If they can’t scare up any more, they may be in for a savage shakeout. “
– Sean Parker, Co-founder of Napster, on the NASDAQ crash of 2000.

The build up to this crash began with the incorporation of several companies that had the dot-com prefix. These companies could escalate their stock prices by simply adding an e- prefix to their name or the .com suffix. The NASDAQ composite index had seen a sharp rise over the past year, and peaked at over 5,000 points in March, 2000. But once the federal court hearing the case of United States v. Microsoft declared the latter to be a monopoly, stock markets saw a volatile day of trading.

By the end of 2001, the bubble had pretty much deflated, with many companies having to shut shop after plundering their venture capital, and never notching a profit.

Stock markets are too tempting an investment opportunity to sideline, as many of us would agree. The key to gaining success here, lies in capitalizing on favorable opportunities, and of course, knowing when to stop. The best lesson learned from all the examples mentioned above is to pay heed to the signs of extravagance – and realize that the bubble is soon going to burst.