A Brief Summary of David Ricardo’s Iron Law of Wages

One of the most popular and respected economists of his time, David Ricardo's Iron Law of Wages remains one of his most well-known arguments. Buzzle gives you a summary of his argument in this post. 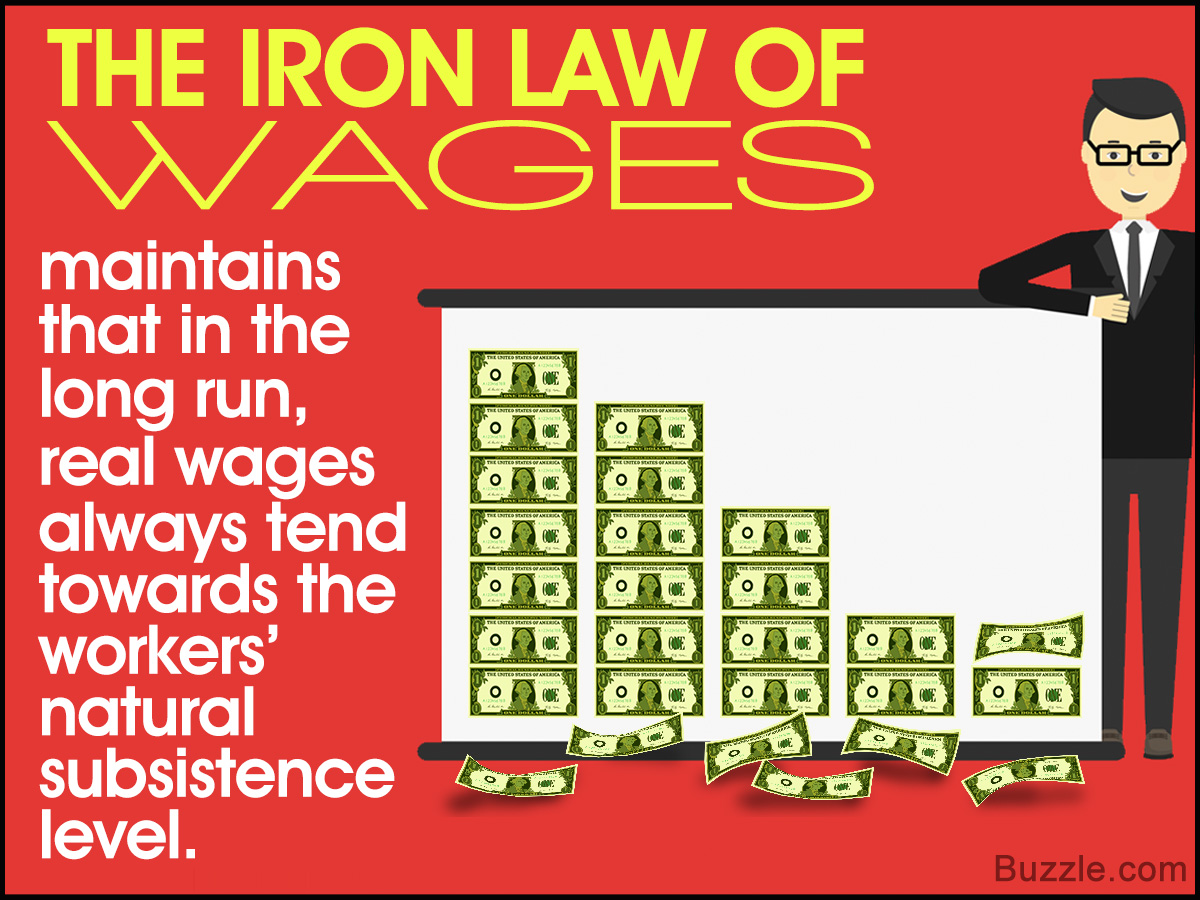 One of the most popular and respected economists of his time, David Ricardo’s Iron Law of Wages remains one of his most well-known arguments. Buzzle gives you a summary of his argument in this post.

“The rise or fall of wages is common to all states of society, whether it be the stationary, the advancing, or the retrograde state.”
― David Ricardo

David Ricardo is considered to be one of the most influential classical economists, whose name continues to demand respect even today, almost two centuries after his death. His theory of the Iron Law of Wages is one of his most well-known and influential arguments.

Born in England in 1772, Ricardo began his career as a stockbroker in his teens. However, he was inspired by Adam Smith’s book, ‘The Wealth of Nations‘ to take up economics further, and he went on to write his first economics article at age 37, which was accepted by the economist community in England. Ricardo is also responsible for putting forth the principle of comparative advantage, the labor theory of value, and theories about rent, wages, and profits, among others.

The Iron Law of Wages

The Iron Law of Wages is a theory in classical economics which claims that in the long run, real wages (wages that are in term with the amount of goods and services that can be purchased with them) always tend to move in the direction of the minimum wage that is necessary for the survival of a worker and his family.

According to Ricardo, labor can be bought and sold, and has its own natural and market price. The natural price of labor is the price which is required for a laborer to sustain himself, in accordance to the price of essential goods and services available in the market. The natural price of labor rises and falls according to the price of essentials in the market. The market price of labor is the price paid for the labor keeping in mind the laws of demand and supply of labor―labor is expensive when it is scarce, and is inexpensive when it is available in plenty.

Ricardo was of the opinion that the market price of labor was never constant, and this rise and fall of price depended upon many factors, such as:

Every increase in investment requires more labor, and hence, the demand for labor increases, which leads to a rise in the price of labor. This means that the laborer now has additional wages that are more than what he needs to sustain himself and his family, which means he experiences prosperity during this time.

According to Ricardo, a rise in the price of labor meant an increase in the population, which in the long run would result in the rise of the number of laborers, which would in turn cause the demand for laborers to fall, as labor would be available in plenty. Thus, labor would again fall to its natural price, or sometimes, even fall below it.

Ricardo said that, “When the market price of labor is below its natural price, the condition of the laborers is most wretched: then poverty deprives them of those comforts which custom renders absolute necessaries. It is only after their privations have reduced their number, or the demand for labor has increased, that the market price of labor will rise to its natural price, and that the laborer will have the moderate comforts which the natural rate of wages will afford.“

The rise and fall of the price of labor depending on the demand and supply of the same would then turn into a vicious cycle, from which the poor labor class would suffer the most. Even if every increase in investment capital caused an increase in the market price of labor, it would still be leaning more towards the natural price of labor as the prices of essential commodities too rise, as more and more labor is required to produce enough to sustain the rising population. This, according to Ricardo, is the Iron Law of Wages.

Basically, the price of labor always tended towards the natural subsistence level because of the laborers’ tendency to expand their families with a rise in their incomes, leading to more availability of labor in the long run, which would lead to a drop in wages, and hence, there was no point in trying to raise the price of labor.

Ricardo believed that the solution to this problem was a laissez-faire economy, where the price of labor would depend upon the fair and free competition in the market, and would never be controlled by anything other than those factors. A laissez-faire economy is one where things are allowed to take their own course, and are not controlled/directed by the government. He strongly opposed the Poor Laws (laws which were supposed to provide relief to the poor and needy) that were practiced in England at the time, on the grounds that they did nothing to help the national revenue, as well as further deteriorated the condition of both the rich and the poor communities.

Criticism of the Iron Law of Wages

Other economists strongly criticized Ricardo’s theory of the Iron Law on the grounds that the assumptions he made in this theory were not realistic.

✦ Elasticity of labor
Ricardo had assumed that labor was completely elastic while formulating his theory. However, this cannot be considered correct as the elasticity of labor also depends upon several factors.

✦ Prosperity leads to an increase in population
Ricardo believed that if a laborer received more wages than what was needed to sustain him and his family, he would have enough to afford to have more children. Though this might be the case with some laborers, it is not always true. Not every family wants to increase in size just because of an increase in its real income.

Despite the criticism for Ricardo’s Iron Law of Wages, it still remained one of his most influential works. It is believed to have further inspired the works of several prominent figures, including Karl Marx.