The Key Differences Between Color of Title and Claim of Right

Adverse possession is a strange law, by which one becomes the owner of a property simply by living on it. WealthHow tells you the difference between color of title vs. claim of right; the two methods of adverse possession. 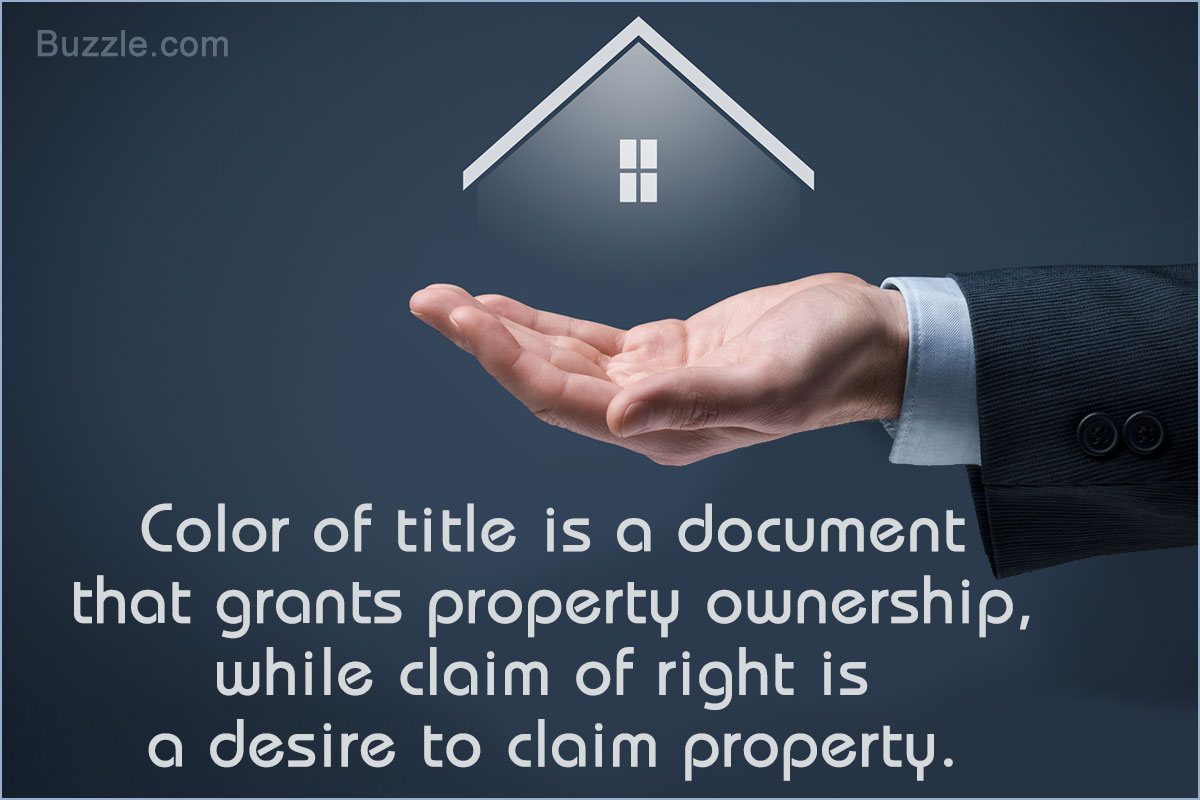 Adverse possession is a strange law, by which one becomes the owner of a property simply by living on it. WealthHow tells you the difference between color of title vs. claim of right; the two methods of adverse possession.

In the field of law, adverse possession is a method by which an individual becomes the owner of a property without paying the true owner for it. Such a person is called an ‘adverse possessor’. To gain property in this way, an adverse possessor usually has to live on it, and strictly fulfill certain conditions.

The primary condition is that, the person claiming the property should live on it for a certain period, called the Statute of Limitations, which is usually 12 – 20 years in most states. He/she should be the only resident on the land. Moreover, the property should be occupied in such a way as to send a message to the real owner (if any) that the occupier thinks of himself as the legal owner. These conditions help courts turn down fraudulent claims, i.e., where the adverse possessor claims the land despite knowing all along that it belonged to someone else.

An individual can claim land by adverse possession either under color of title or claim of right. These terms are often confused for one other. Let us see the differences between them.

❒ This document can be any written instrument, such as a deed or a will. The defects that prevent it from giving legal ownership can be the fact that the individual who gave the land was not the true owner in the first place, was mentally ill, etc.

❒ Color of title can be beneficial to someone who wants to claim land under adverse possession. This is because, in most US states, court laws reduce the statute of limitations (SOL) period for someone who possesses this document, as compared to someone who doesn’t.

Example : In North Carolina, the SOL period is reduced from 20 to 7 years for an individual having color of title. This means that, a person without this document would have had to occupy the property for 20 years to claim adverse possession, while he needs to live on it for only 7 years if he has the color of title.

❒ Advantage of having color of title is that, it gives ownership of the entire property mentioned in the document, and not just the property the individual actually occupies. For example, a person having color of title to a property of 20 acres, but occupying only 5 acres, would still receive the whole 20 acres when he approaches a court, provided he fulfills all conditions of adverse possession.

❒ However, there are some additional requirements that a person needs to fulfill, apart from those for adverse possession. The individual should regularly pay the property taxes for the land, and be involved in improving it in some way, such as building a fence around it, for example.

❒ Claim of right (or title) is an intention of a person to claim a property on which he/she has been living, as his/her own. This term is usually a synonym for ‘hostile’ or ‘adverse’ use. This doesn’t mean that the person has an intention to harm the true owner, but his claim of ownership is ‘adverse’ to the owner’s interests. Therefore, claim of right can be made by a person who trespasses on someone’s property, without his/her permission.

❒ A requirement of claim of right is that, the adverse possessor should communicate his intention to the true owner. This communication can be direct, such as speaking verbally or sending a mail to him/her, or by acts that clearly show the person believes himself to be the true owner without saying it. Then, after the SOL ends, the adverse possessor can claim the land in court, under the claim of right.

❒ Another important point for a person to receive land under claim of right is, the true owner should not stake his own claim before the SOL ends. This is despite the latter knowing that the occupant believes himself to be the owner. If the court discovers that the true owner claimed the property as his own to the adverse possessor before the SOL was over, the latter may not receive legal ownership.

Color of Title Vs. Claim of Right: Main Differences

❑ Color of title (COT) is a written document, while claim of right (COR) is not.

❑ COT shortens the SOL period, while COR provides no such benefit.

❑ Most adverse possessors approach courts with a COR, rather than a COT.

❑ In a successful claim, a COT grants its possessor the entire property mentioned in the document, but a COR gives the person only the property he actually occupied.

If a person claims a property as his own under claim of right or color of title, he/she may not always have a fraudulent intention to take over someone’s property. In fact, such an individual may have developed an emotional attachment with the property, because he occupied it for a long time. This is the reason why courts may allow the person to become the legal owner by adverse possession, if he fulfills all requirements. As such, it is vital to always look out for trespassers on one’s property.